“It doesn’t matter if you’re seventeen or seventy-seven, there is something for you to do. We have a casino, bars, restaurants, museums and a beach. The people are awesome. If you come to Milwaukee and you say you didn’t like it…. It’s not the city. It’s you.” 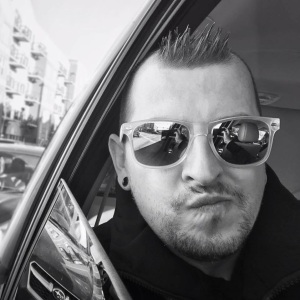 I am starting to realize that the more Milwaukeean’s I chat with, there’s not a person who thinks this place is just “alright.” I’m always greeted with a laugh or a chuckle when I ask, “How would you describe Milwaukee to someone who has never been here?” It strikes a chord. A small bit of pride is always included in their answer. The quote you read above was Martin Moore’s answer to that question with the addition of “Dope as ____”, but I’ll let you fill in the blank.

Like any other Milwaukeean, Martin has his favorite restaurants: Blu & the Pfister Hotel, The Safe House, The Swinging Door Exchange and Barnacle Buds. His favorite hangouts include the pier at McKinley Marina, the Oak Leaf Trail, and Discovery Word. You’re probably wondering…why is she telling Martin’s story? What makes Martin stand out? Why can’t she just get to the point already!? Here we go…

In 2017, Martin landed his dream career as a photographer, filmmaker & marketing extraordinaire with Koss. You may have seen his YouTube channel, Twitter account, or even him walking the streets with a huge grin on his face while filming a vlog (video blog). Martin has a way of capturing his audience to make you feel like you’re walking right beside him, experiencing exactly what he is experiencing at this very moment. He’s been an entertainer since birth, starting with a competitive career as a magician at seven years old. That knack for the spotlight definitely shows.

His vlogs cover a variety of topics: adventure, travel, career, personal life, and, my favorite topic, Milwaukee. I asked how he got to where he is now and if he has any advice for people when taking the leap in order to land their dream job. He said that through grinding, perseverance, human connection and well, vlogging (That’s how Koss found him). He attributes many things in his life to vlogging. It opened up opportunities for him to meet people, practice public speaking, and move from fixing cars to his current dream job. He let me know that he wasn’t afraid to fail. He said that many people are afraid…but you might as well fail at something you love, since it is just as easy to fail at a job you hate.

Martin’s first vlog was asking people on Bradford Beach why they love Milwaukee, using his iPhone. While most of them said beer, one person did say that it was the people. And that, folks, is why we all keep coming back.

A special thank you to Editor-in- Chief Ciara Beckers for always keeping my grammar in check.

View all posts by howsheseesmke

My Tweets
Follow how she sees milwaukee on WordPress.com